When I pitched the idea of IF Maitland to the Hunter Writers Centre’s Director almost four years ago I had no idea what the ramifications for the future would be.

The idea had been born out of concern that I’d witnessed so much history die with those who had lived it, feeling heartbroken that they’d never recorded their stories. A few years prior, I’d had my first experiences of self-publishing and, despite some initial missteps, had been amazed by how straightforward the process is in the 21st Century (albeit coming from a professional creative background where I was familiar with much of the software involved in the process).  Print On Demand (POD) technology empowers authors so they are no longer at the behest of mainstream publishers, nor do they need be at the mercy of the more unscrupulous of the vanity publishers. The same innovations that have led to the advent of POD have also enabled far more independent publishers to emerge, increasing the options for those whose work may be a bit too esoteric for mainstream publishers, but feel uncomfortable with developing their own imprint and lunging into the self-publishing experience on their own. This is particularly evident in the poetry community, as evidenced with the amazing works produced by publishers such as Puncher and Wattmann and Flying Islands, both part of yet another extraordinary poetry component of the festival, curated by co-director, Gillian Swain.

Last year we expanded to include visual arts and performance arts, in recognition that they too are legitimate forms of telling your story, the fundamental theme that drives the festival.

In addition to the traditional writers panels, book launches and writers workshops, we now also feature art displays, artist talks, visual art workshops, theatrical performances and even a feature film. It has blossomed into a true arts festival that far exceeds the scope of my original vision.

The very nature of the festival has been almost like a beacon to the world’s largest distributor of POD, IngramSpark, and we’re pleased have their ongoing support again this year. We’ve been lucky that this has been the case with all our major sponsors to date, Hunter Writers Centre and Maitland City Council having also been with us from the start. When the Mutual Bank came on board last year, they made it clear they intended to be with us for the long haul, helping to create a sense of certainty when planning ahead. And in 2022, we’ve also had the good fortune to receive the generous support of Galloway Family Law, whose contribution came at a time that was critical in determining whether or not this year’s festival would be viable.

Of course, sponsorship comes in many guises and forms. The incredible support of our two major venues, Studio Amsterdam and Sun Street Studios, cannot be overstated, nor the generosity of Hunter Valley Writers in the donation of their space for multiple workshops over two weekends. The degree to which all these venues have accommodated our needs is astounding. But there’s many more venues involved. For the past two years we’ve also played host to the shopfront exhibition in the Levee, where small businesses donate their shopfronts to artists to display their works over the two weeks of the festival. On behalf of the committee, I extend my gratitude to all our sponsors, big and small. But most of all, I’d like to thank each and every person who has ever shown an interest in attending, lodged an expression of interest, or even just visited this site.

I sincerely believe we’ve created our best ever festival program and hope you enjoy the extraordinary array of discussions, workshops, performances and so much more that this year’s festival has to offer.

Most of all, I hope you leave this year’s festival feeling motivated and empowered to tell your story. 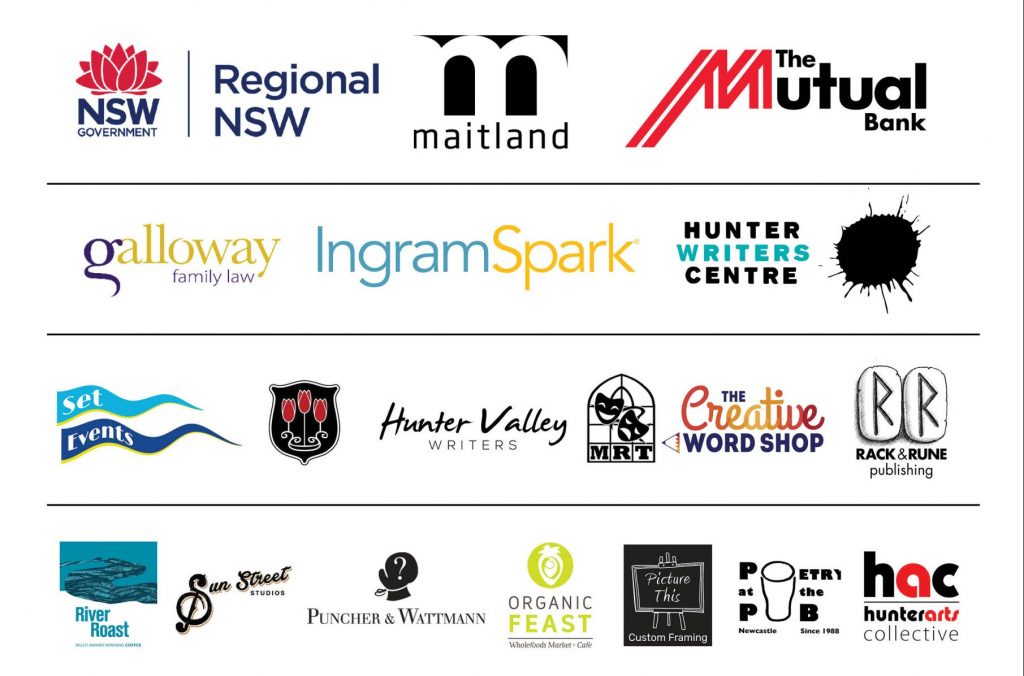